A new edition has been published, the details can be seen here:
Keay's Insolvency: Personal and Corporate Law and Practice 10th ed isbn 9780455239811 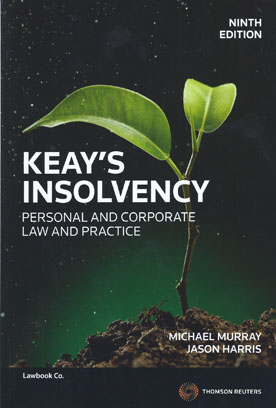 The ninth edition of Keay’s Insolvency has come at a time when major insolvency reforms, foreshadowed in previous editions, have just been announced.

While none of these has become law, the authors have introduced readers to the proposed changes and the considerable impact they will have on the operation of the law and the administration of insolvencies. These include the introduction of a safe harbour defence to insolvent trading, allowing more emphasis on informal restructuring, restrictions on counter-parties terminating contracts under “ipso facto” clauses, and allowing small companies to go through a streamlined liquidation process.

The timing of these reforms, and their significance, is such that those studying and practicing in insolvency need to have an understanding of what is coming, which Keay will provide, even if by way of brief comment at various points throughout.

Those reforms have confirmed the authors’ continued and increased focus on corporate restructuring law and practice, including outside the context of formal insolvency, an on-going trend in Australia, and internationally.