This book is now Out of Print.
A new edition has been published, the details can be seen here:
A Practitioner's Guide to Inheritance Act Claims 3rd ed isbn 9780854902224 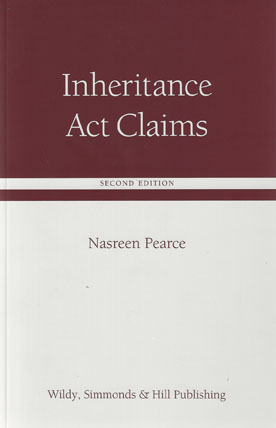 
Inheritance Act Claims provides a clear, comprehensive, easily accessible and practical guide to the provisions of the Inheritance (Provision for Family and Dependants) Act 1975 as amended.

It sets out in detail material which is likely to be of assistance to lawyers and non-lawyers relating to the background to the legislation:-

It contains relevant information relating to cohabitants, the impact of the Civil Partnership Act 2004 and the Human Fertilisation and Embryology Acts 1990 and 2008.

The appendices include a range of sample forms and precedents, the text of the 1975 Act and the relevant provisions of the CPR.