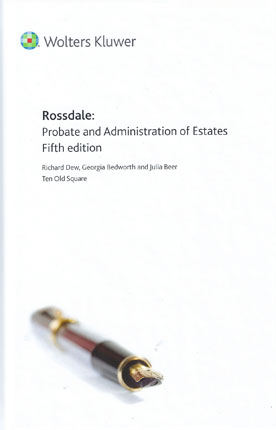 Written in a highly practical style, accessible to either the specialist or the general practitioner, this book is set to build on its reputation as one of the key reference works on the subject for all those involved with probate and the administration of estates. Its combination of a user-friendly text with detailed footnotes makes it an ideal reference source for all probate practitioners, whatever their level of experience in the area.

What does this title cover?

This book has a broad scope. It deals with the process of administering the estate from start to finish: from the obtaining of the grant to the final distribution, with some diversions in between. The text is intended to be a practical guide. It is by no means an academic treatise which deals with each and every problem or question which may arise when administering an estate. Some of the topics touched on in the book may require specialist advice. We have endeavoured to highlight in the text the occasions when specialist advice may be necessary or made reference to more detailed texts on the subject.

Although primarily designed to assist those acting for the personal representatives, we have included material which assists anyone involved in the administration of estates, from beneficiaries of the estate to those wishing to challenge the deceased’s will.