This book is now Out of Print.
A new edition was published, see:
The Insurance and Reinsurance Law Review 2nd ed isbn 9781909830004

The Insurance and Reinsurance Law Review 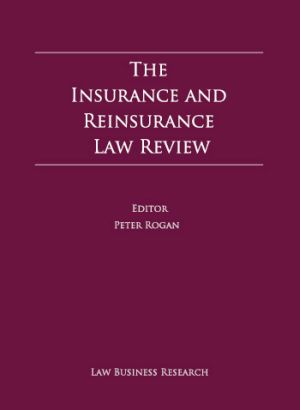 
It is hard to overstate the importance of insurance in personal and commercial life. It is the key means by which individuals and businesses are able to reduce the financial impact of a risk occurring. Reinsurance is equally significant: it protects insurers against very large claims and helps to obtain an international spread of risk.

In general the insurance and reinsurance industry was able to withstand the events of the financial crisis better than other financial institutions, certainly the banks. With the exception of specialist lines such as directors’ & officers’ and trade credit insurance, insurers and reinsurers suffered relatively little exposure to the financial market losses. If the crisis has triggered a more stringent regulatory regime for financial services generally that is no bad thing, but it should not be forgotten that insurance activity neither led to, nor was unduly affected by, that crisis.

The natural catastrophes and man-made disasters of 2011 and 2012 have caused not only human tragedy and loss of life but also enormous insured losses. A 28 March 2012 study by Swiss Re revealed that, altogether, natural catastrophe insured losses came to around US$110 billion, while losses from man-made disasters were around US$6 billion and in 2012 insurance losses arising from the catastrophic events of the year were set to reach approximately US$65 billion.

The events of 2011 and 2012 provided significant challenges for the insurance and reinsurance industry. However, the industry proved to be highly effective in overcoming these challenges. Despite losses on a historic scale and a difficult economic climate, it played a key role in bringing financial relief to populations, businesses and governments suffering from the effects of the disasters.

There are many insurance and reinsurance publications available. However, in this increasingly globalised industry there is a need for a source of reference which analyses recent developments in the key jurisdictions on a comparative law basis. This volume to which leading insurance and reinsurance practitioners from 22 jurisdictions around the world have made valuable contributions, seeks to fulfil that need.