This book is now Out of Print.
A new edition was published, see:
The Private Wealth and Private Client Law Review 4th ed isbn 9781909830677 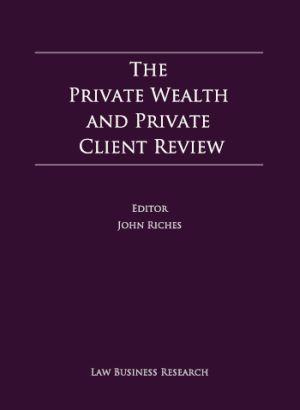 
The overarching trends identified in the first edition of The Private Wealth and Private Client Law Review in 2012 have remained dominant themes in the world of private wealth and tax planning in 2013. There has been an unstoppable rise of tax and information exchange agreements, and there has been deepening interest in areas of tax planning morality and family governance.

We have recently heard that the United States has deferred the introduction of its Foreign Account Tax Compliance Act (FA TCA) for a further six months. What is fascinating in charting the FA TCA project’s progress is that, having adopted regulations that are applicable to jurisdictions with whom no bilateral intergovernmental agreement has been signed, the United States has effectively embarked upon a campaign of entering into either Type I or Type II intergovernmental agreements with all major trading partners and mainstream offshore jurisdictions.

Politicians from many jurisdictions continue to play the ‘morality’ card in their efforts to attract voter support. The primary focus of political and press comment in the morality field to date has been directed at big-name multinational corporates who appear not to be paying what might be regarded as acceptable levels of tax in different jurisdictions. It may only be a matter of time, however, before the focus switches to private client structures.

In parallel with the greater focus on compliance that has been driven by the policy changes on tax information exchange noted above, many families continue to focus more explicitly on internal family governance arrangements, particularly where their asset base encompasses active trading businesses.