This book is now Out of Print.
A new edition was published, see:
The Public Competition Enforcement Review 8th ed isbn 9781909830929 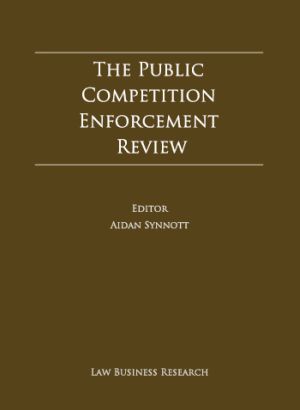 
The reports from around the globe collected in this volume will be of keen interest to practitioners of competition law everywhere. Increasingly we see that effects of public competition enforcement in individual jurisdictions are felt well beyond those jurisdictions as firms become globalised and cross-border trade increases.

To be sure, many jurisdictions retain important local particularities in competition law and enforcement priorities. However, as we can see from the reports collected in this volume, increasing international cooperation among competition enforcers, the widespread reach of firms’ conduct and the economic circumstances of certain industries have led to a notable convergence in the cases attracting the attention of enforcers.

With respect to cartel enforcement the reports from the European Commission and the United States along with Brazil, China, and Japan, show continued enforcement actions against automotive parts cartelists, levying substantial fines in this area. Other areas of cartel enforcement include ocean shipping and cartels related to liquid crystal displays.

We also see several jurisdictions active in the healthcare sector and related fields. The United States, the European Commission, the United Kingdom, Brazil and Italy have all undertaken or continued enforcement actions related to alleged attempts by pharmaceutical manufacturers to delay the entry of generic competitors.