This book is now Out of Print.
A new edition has been published, the details can be seen here:
Court of Protection Handbook: A User's Guide 3rd ed isbn 9781912273270 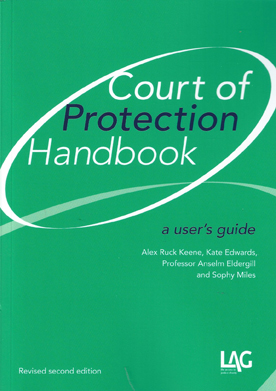 
This revised second edition has been updated to include the new Court of Protection Rules 2017 which comes into force on 1 December 2017. There is supplementary commentary from the authors highlighting the key changes since the second edition.

The book begins with an overview of the Mental Capacity Act 2005 and the Court of Protection, before turning to a step-by-step guide through the processes of preparing and making an application, funding and representation issues, preparing for and appearing at hearings, evidence, costs, enforcement and appeals. Court of Protection Handbook is comprehensive yet accessible. Complex issues are explained clearly and succinctly with the helpful use of tables and other diagrams.

This edition includes helpful flowcharts on property and affairs, health and welfare and DOLS applications. More practical guidance has been provided on facilitating the role of 'P' and the role of experts in the Court with contributions from a psychiatrist and an independent consultant nurse.

The main text is supported by a wealth of supplementary materials: legislation, the consolidated Rules and Pilot Rules, guidance, sample statements and letters and useful addresses.

The authors are widely recognised as leading specialists in Court of Protection work, with an unrivalled breadth of experience. Three are practitioners who have represented clients in cases involving the Mental Capacity Act up to and including the Supreme Court, and the fourth is one of the most highly respected judges of the Court of Protection. They also write, teach and train extensively on the Mental Capacity Act and the Court of Protection, and are all at the centre of development of law and procedure in the court, including the creation and implementation of the new Case Management Pilot.