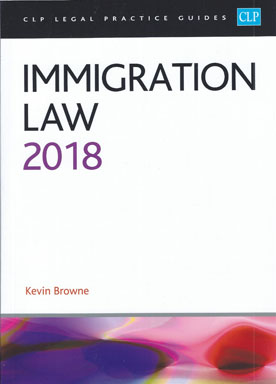 
Immigration Law is a straightforward, up-to-date and practical introduction to this changing area of law.

After a short, practical introduction in Chapter 1 (which includes a list of useful websites), the book deals with British nationality and the right of abode in the United Kingdom in Chapter 2. This is followed by a detailed analysis of immigration controls in Chapter 3. The pre-Brexit immigration status of EU and EEA nationals and their family members is considered in Chapter 4, along with how a family member of a British citizen who has engaged Treaty rights might currently use EU rather than domestic law to enter the UK.

The next four chapters address the key immigration categories of entry to the UK, including chapters on visitors, students under Tier 4 of the points-based system and employment under Tier 2. Asylum seekers and refugees are considered in Chapter 9. Enforcement of immigration law, the appeals system and judicial review applications are dealt with in the last three chapters.

New cases in this edition include:-