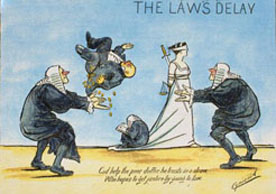 'God help the poor duffer, he trusts in a straw, Who hopes to get justice by going to law.'

Martin Anderson who signed as Cynicus (1854 - 1932) was a Scottish cartoonist noted for his satirical and humorous style.

In a chequered career he shot to fame in London, built a castle - 'Castle Cynicus' near St Andrews - but lies in an unmarked grave.