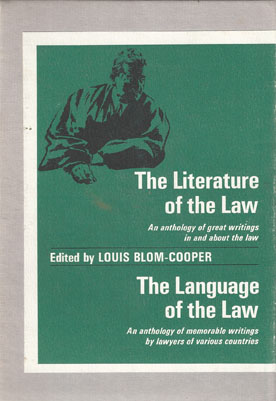 The Literature of the Law: An Anthology of Great Writings in and about the Law - (Published in the UK as The Law as Literature)

The Language of the Law
Sir Arthur Quiller-Couch, editing the Oxford Book of English Prose discovered a new vein of literature. Law books, undeniably rich in legal learning, contained - rather surprisingly, he found - a sizeable body of good writing. But the recovery of these literary gems from their legal environment was a formidable task, and only three judges found their way into his anthology.

The Law as Literature
Much legal writing, embedded as it is in abstruse terminology, is obscure and of interest only to lawyers. Yet the law, which touches on almost every side of life, has also produced a fund of good literature of which few people are aware.

In this anthology, Louis Blom-Cooper, legal correspondent of the Guardian and the Observer, has helped to bridge the gap between lawyer and layman, by presenting a varied selection of first-class writings over the centuries in and about the law.

The pieces have been chosen according to a number of criteria - some for the human conflicts which they illustrate, others for their wit and precision of language, others again for their subtlety in argument or their clarity of exposition and description, all for their interest and relevance today.

The drama of the law centres in the courts themselves. Socrates and Gandhi, so distant in time yet so curiously similar in approach, are among those who speak here in their own defence. For the prosecution there is Judge Jackson's closing address in the Nuremberg Trial and- an unusual document - the notes which Sir Richard Muir had before him as he opened the Crown's case against Dr Crippen; while the art of cross-examination is represented by Sir Charles Russell's brilliant verbal duel with Pigott before the Parnell Commission.

From the bench, a rich source of legal literature, there is a variety of judgments Mr Justice Maule's address to a convicted bigamist, Lord Sumner's masterly analysis of the blasphemy laws, Lord Justice Harman's astute interpretation of the will of Bernard Shaw, and many others.

These pieces are all products of the law in action. The observer's view of the law is also recorded - Harold Laski's account of what it feels like to be a litigant and to lose a case, Kenneth Tynan's impressions of 'Lady Chatterley's Trial' and James Morris's report of the Powers Trial in Moscow.

Legal biography is well represented, as is also jurisprudence. Finally, there is an important section on the vexed issue of punishment, including a hitherto unpublished letter by Charles Dickens.

All the pieces are fine examples of English prose which deserve to be remembered not only for the insight they provide into the fascinating world of the law, but for their literary qualities and - not least - for their sheer entertainment value.

Contents:
The Language of the Law
Foreward
Introduction
Acknowledgments
1. On and Off the Bench
2. Crime and Punishment
3. Family Relations
4. Slaves and Citizens
5. P.P.E.
6. Words, Words, Words...
7. Judicial Restraint
8. Judicial Felicities
Notes on Contributions
The Law as Literature
Foreword: Lord Birkett
Editor's Note: Louis Blom-Cooper
1. Prosecution and Defence
2. The Courtroom Scene
3. On Law
4. On Lawyers
5. From The Bench
6. Crime and Punishment