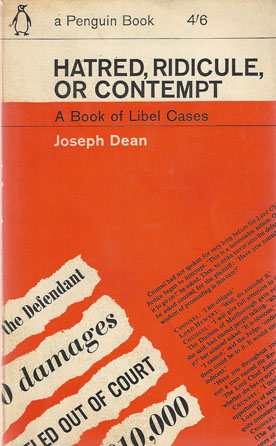 Such a measured and memorable conclusion (from Ralston v Ralston, 1930) suggests that the law of libel can at times be as quaint as a Cornish lane. Consider the case of Mr John Canning, who received a postcard telling him to 'get back into his ruddy cage'.

It transpired that in a recent book there had been a Mr Canning who ran from cage to cage in the Zoo to escape the police. Mr John Canning took action for libel. As did an actress, Mrs Porteous, who was said in a review to have performed like a 'raging frothing epileptic, rolling on the floor and biting her toe-nails.'

Many, familiar figures take their place in the witness box in this curious and fascinating collection of libel cases - Lord Alfred Douglas, Winston Churchill, Horatio Bottomley, Prince Youssoupoff, Alaister Crowley, Harald Laski, and even the sons of W.E. Gladstone fighting to expunge a charge of lechery against the G.O.M. of the Liberal tradition.