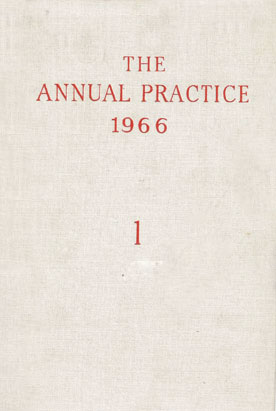 The Annual Practice being a collection of the Statutes, Orders and Rules relating to the General Practice, Procedure and Jurisdictions of the Supreme Court with Notes &c.

The Annual Practice originally published in 1883 was to become The Supreme Court Practice in 1967, and then The White Book Service: Civil Procedure in 2000

Wildy's had a number of volumes available for sale from the 1960's. All below have now been sold