The Criminal Prosecution in England 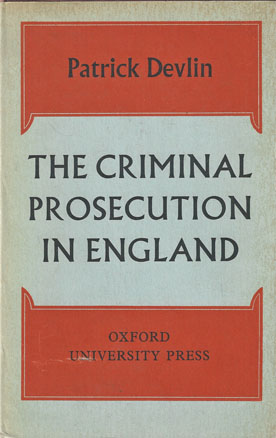 In The Criminal Prosecution in England based on the Sherrill Lectures given at the Yale University Law School in 1956, Sir Patrick Devlin deals with the prosecution of crime from the time of arrest until the time of arraignment, and with the rights and duties of the Crown and of the accused while the case for prosecution is being prepared for trial.

He is particularly concerned with the part now played in the investigation of crime by the police, and with the rules, partly self-imposed and partly derived from the judges, by which they find themselves more and more controlled in their work of inquiry, and he explains with an erudition lightly born but founded upon a lifetime's experience the reasons that lie behind the combination of unwritten code and the letter of the law that characterizes the English system.

The Criminal Prosecution in England will therefore be of particular interest to the police as well as to the general reader who would like a clearer understanding of the working of English law.