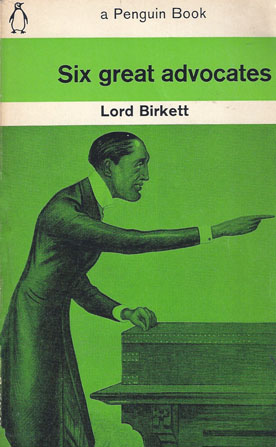 The advocate no longer plays the part in our public life that he once did. The fashionable divorce suit, the sensational libel action, the great murder trial - they are no longer the dramatic events that once occupied public attention to the exclusion of almost everything else.

This book contains seven broadcast talks recently given by Lord Birkett. The wide interest of the public has been due in some measure to the great reputation which Lord Birkett had won for himself as an advocate in the criminal courts before he became one of Her Majesty’s judges.

The advocates discussed here are:-

All these men entered the House of Commons and, with the exception of Marshall Hall, they all became Law Officers of the Crown. Both Russell and lsaacs reached what many people regard as the highest office in the legal world—the office of Lord Chief Justice of England — and Erskine became Lord Chancellor.

Given the opportunity to nominate the six outstanding advocates the author chose Edward Marshall Hall, Patrick Hastings, Edward Clarke, Rufus Isaacs, Charles Russell, and Thomas Erskine, three of whom he had known, and three who had lived in earlier times but whose fame had endured.

He stresses repeatedly that it is impossible to assess the brilliance of these men by considering only the written records of their speeches, which can seem sentimental, or flowery, or unconvincing to modern ears. Instead, it is necessary to rely on the impressions recorded by their contemporaries, for their words were chosen to meet the challenge of a transient moment, and they should be judged by those who witnessed them in action, and in reference to the times during which they lived.

He suggests their skill is as much in their presentation as in their words, for advocacy is multi-dimensional, combining drama, passion, gesture, expression, tone of voice, and force of personality, all tailored to fit one particular moment in time.