A Calendar of Murder: Criminal Homicide in England Since 1957 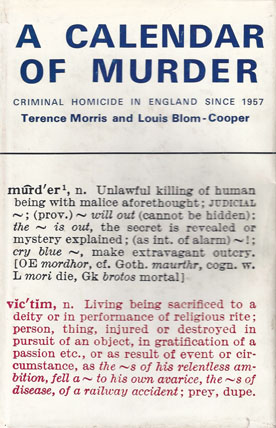 For the first time in the debate about capital punishment, abolitionists and retentionists will have at their disposal the vital information on the true nature of homicide. This book provides thumbnail sketches of every person indicted for murder in England and Wales since 1957 and a brief outline of his crime.

It can raise the level of discussion from the realm of opinion, speculation and emotional bias to the status of factually based argument. A Calendar of Murder is the first comprehensive study of murder over a given period in any single country.

It is about people - a sociology of murderwhich tells not only of the killer but also of his victim. Here the reader can lay for himself the myths which surround the 'crime of crimes'; the predominance of domestic homicide, the high incidence of mental instability and disorder, the unpremeditated nature of almost all killings, the role of the victim in precipitating his own violent end, the comparative rarity of the 'sex monster' and the special position of the professional criminal.

The authors draw on this material to provide a conspectus of homicide. They consider murder as a social fact-the ways in which society classifies killing into capital and non-capital murder, manslaughter and infanticide, categories which evoke different emotions ranging from outright condemnation through degrees of tolerance to genuine sympathy.

They consider how the law reflects - or sometimes fails to reflect - these social attitudes; and they consider in particular the unique experiment of the Homicide Act of 1957, a compromise measure with inherent anomalies and imperfections which has satisfied neither those who urge retention of the death penalty nor those who would consign to the museum the apparatus of the hangman along with the rack, the thumbscrew and the scold's bridle.