This book is now Out of Print.
A new edition was published, see:
Trial of William Palmer 2nd ed isbn 004266 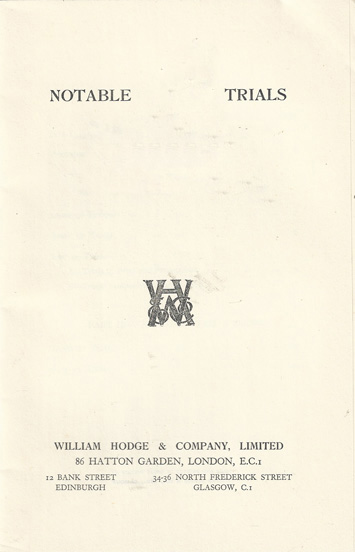 The events which led up to this trial occurred in November, 1855, at Rugeley, in Staffordshire, where William Palmer had been a medical practitioner until two or three years previously.

Mr. John Parsons Cook, whom Palmer was charged with poisoning, was a young man of about twenty-eight, who had been articled as a solicitor, but he inherited some 12,000 and did not follow his profession. He went on the turf, kept racehorses, and betted, and it was in this common pursuit that Palmer and Cook became acquainted.

Three judges were appointed to try the case, a very rare occurrence in England. Palmer was found guilty of the crime charged against him and suffered the last penalty of the law.

Trial of Mrs. Maybrick
Edited by: H. B. Irving
ISBN 004281
Published December 1912
William Hodge and Company, Limited
Out of print