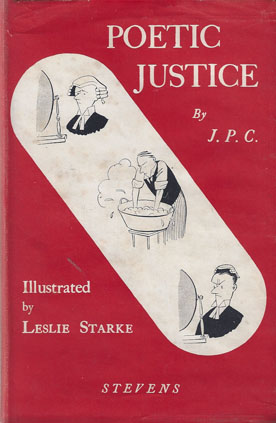 A book of Legal Poems. Illustrated by Leslie Starke

Although Hulton and Jones is getting on for forty it is still the fashion for an. author to disclaim all legal responsibility for his work, even if he is positively oozing with malice.

I've never known a father to get out of paternal responsibilities as easily as that, so I content myself with saying that my offering to the public is entirely 'without prejudice' and that reading between the lines is against the rules. As Sir Walter Scott says:-

It is a pleasanter and more useful fashion for authors to give an indication of where their various verses were perpetrated. I will spare you details and merely say in an omnibus way that these verses were put together in the Long Vacation from notes made in the corridors of courts and trains, on the backs of envelopes, cheque-books and the like, and in one instance (I blush to admit) on the flyleaf of a legal textbook.

I pass on to the distribution of bouquets and thanks, without which no legal volume would be complete. I am particularly indebted to members of the Chancery and Admiralty Bars, who lent me books which I never knew existed and which I found great difficulty in understanding.

I have, however, made some use of the complicated information they contained, and have now returned them to their owners, as I am unlikely to require them again.

As for acknowledgments - I have none to make. Most of these verses have never appeared anywhere before : and I doubt if they will ever appear anywhere again. , Finally, I express the hope that you will like the absence of footnotes in this little book. Wherever there was any danger of their intervention I incorporated them in the text.