The Oracles of the Law 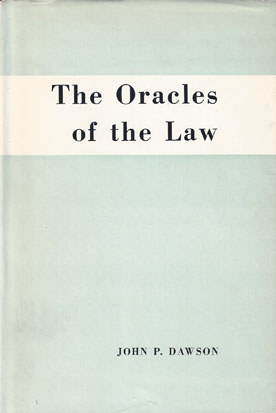 The Oracles of the Law is a historical and comparative study of case law in western Europe. English law from its beginning was mainly produced by court decisions.

But in Roman law and in legal systems that fell under its influence the tradition has been that law is made in other ways, chiefly by expert jurists who had no official connection with courts. This tradition was confirmed by the experience of medieval Italy and carried forward into Germany through the German reception of Roman law.

The prolonged striving of German lawyers for system and synthesis confirmed this tradition in another way. France followed a different course. French courts took over leadership but earned for themselves a lasting distrust through excessive pretensions to political power.

The main thesis advanced is that case law must be a major component in modern legal systems, whether or not they are codified, but that methods of administering it differ greatly because of remembered history.