The Innocence of Edith Thompson: A Study in Old Bailey Justice 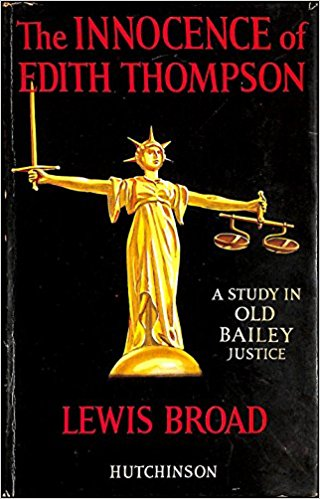 Frederick Bywaters and Edith Thompson were jointly charged at the Old Bailey with the murder of Percy Thompson, the woman's husband. Mrs. Thompson had written a long series of letters to Bywaters, who was at sea. In these letters were direct references to alleged attempts which she represented herself as making on the life of her husband.

When read in Court, these letters produced a great effect upon the jury. Nevertheless, the case for the prosecution was a weak one, inasmuch as there was no witness of the murder, except possibly Mrs. Thompson. But Mrs. Thompson insisted on going into the witness-box, and, under a searching cross-examination, she made some damaging admissions.

By Way of Introduction The purpose of this book is to prove what has frequently been asserted, that Edith Thompson was not guily of complicity in the murder of which she was convicted and for which she was hanged. Her innocence has been proclaimed by half a dozen authors, notably Miss Tennyson Jesse.

Marshall Hall believed her guiltless. Lord Birkenhead was confident he could have secured her acquittal. But, despite all the protestations, many grounded on sentiment rather than on logic, no one ahs ever proved her innocent by process of reasoned argument. That is my purpose here.

Contents:
Acknowledgments
In the Case
By Way of Introduction
Part I: The Love Affair
Romance Comes to a Romantic
Letters in Absence
Powdered Glass and Poison
Days of Estrangement
Last Letters, Last Meeting
Part II: The Crime
Stabs in the Night
Enter Wensley
Choosing a Champion
Part III: The Trial
Case for the Crown
A Champion Discredited
Mrs Thompson Explains
The Effects of Chivalry
Story of a Great Love
Mr Inskip's Last Words
The Summing Up
Oh God, I am not Guilty
Part IV: The Innocence of Edith Thompson
Unplanned, Unpremeditated
A Broken Chain
The Ultimate Catastrophe
Where Justice Erred
Part V: The Letters;