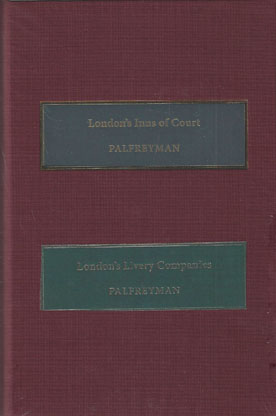 The first two volumes of Palfreyman's Series on London - Livery Companies and Inns of Court , in a planned series of four (to include Pall Mall Clubs and Royal Societies) - are now available as a Set and at a promotional price.

London's Livery Companies, published in 2010, is the story of the people who belong to over 100 City Companies within the Square Mile of the City of London. These organizations are commonly referred to as livery companies, and date back as far as 1155 in the case of the Worshipful Company of Weavers.

This book answers the many questions posed about this social and charitable livery activity, and for the first time data from the annual accounts of the charities controlled by the City Companies is collated to show just how extensive is the financial support provided by them to a huge range of charitable endeavours not only in London and nationally but also internationally.

London's Inns of Court, published in 2011, is the first sizeable and comprehensive study of the Inns (history, legal status, finances, customs, and modern purpose) for over seventy years, since Blackham’s ‘Wig and Gown’ (1932).

As most, but not perhaps all, readers will know there are four Inns that make up London’s Inns of Court (Gray’s Inn, the Inner Temple, Lincoln’s Inn, and the Middle Temple). They probably date from the 1330s or 1340s, and possibly earlier: nobody knows for certain. There are some 25-30,000 members of the Inns: membership figures are not usually made public.

This book answers many of the questions often asked about these Inns and considers the key issues surrounding their modern purpose in training a branch of the English legal profession as well as providing a work-place (and a social-networking space) for the bulk of the country’s legal experts occupying these historic complexes of buildings located in Holborn as London’s legal quarter.

In the context of reforms of the legal profession playing out over the next decade can these Inns really retain, energetically sustain, and imaginatively enhance the crucial and sine qua non facet of those many functions, that being their role as educational institutions - without which they are a lobby group, a club, a supplier of office premises and posh catering facilities, a film set and a tourist target, but will lack the inner vitality that has seen them survive for almost 700 years as ‘the legal university’.