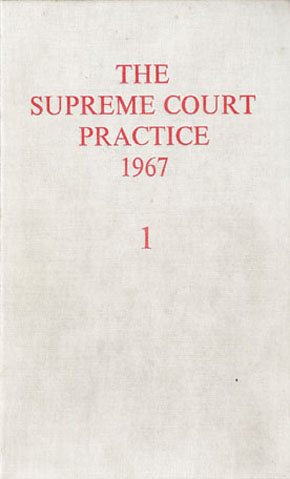 
Out of Print
PREFACE TO THE FIRST EDITION
This would have been the Eighty-fourth Edition of the Annual Practice but it is, in fact, the First Edition of the Supreme Court Practice.

The one publication has immediately succeeded to the other. In truth, the Supreme Court Practice is the former Annual Practice by another name, and this new name has been dictated by the simple fact that the publication will henceforth cease to be annual.

In the process, some 144 Orders and Rules made since 1883 have been revoked, and the provisions of nine Acts of Parliament have been repealed. In fact, the Rules of the Supreme Court 1965 mark the culmination of the labours of several years, undertaken to implement the strong recommendation of the Evershed Committee on Supreme Court Practice and Procedure made in their Second. Interim Report in 1951(Cmd. 8176, para. 117) that " a complete revision of the Rules be immediately put in hand"

That formidable task has been achieved in two stages: first, by the partial revision of about half the rules re introduced in 1962 and which came into force January 1, 1964 (R. S. C. (Revision), 1962, S.I. 1962, No. 2145), and now, by the complete revision, which represents the revision of the remaining half of the rules and embodies the 1962 Revised Rules.

It may fairly be claimed that the final completed product constitutes a comprehensive consistant and coherent code of procedure in the Supreme Court.

PUBLISHERS NOTE ON THE 4th CUMULATIVE SUPPLEMENT
The Supreme Court Practice 1967, replacing the former Annual Practice was published fully up to date on the revision of the Supreme Court Rules which came into force on October 1, 1966. At the time of its publication it was announced that there would not be annual new editions of the The Supreme Court Practice, but that it would be maintained up to date by the issue of two supplements each year. beginning in 1967. This change not only saves expense but also greater value is obtained from the work, because of its constant accuracy and reliability.

This is the Fourth Cumulative Supplement brought up to date to August 1, 1968. It is issued in two parts, one covering Volume I and the other covering Volume 2, and supersedes the third supplement which was up to date to February 1, 1968. which may now be discarded. One subscription charge is being made to cover the cost of both Supplements each year and this charge is 45s. (postage 1s. 9d. extra) for 1968,