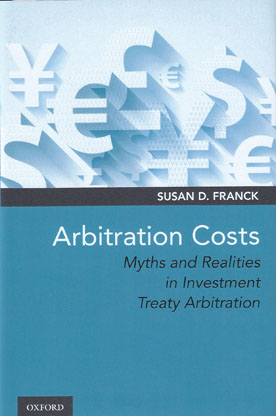 Investment treaty arbitration (sometimes called investor-state dispute settlement or ISDS) has become a flashpoint in the backlash against globalization, with costs becoming an area of core scrutiny. Yet "conventional wisdom" about costs is not necessarily wise.

To separate fact from fiction, this book tests claims about investment arbitration and fiscal costs against data so that policy reforms can be informed by scientific evidence. The exercise is critical, as investment treaties grant international arbitrators the power to order states-both rich and poor-to pay potentially millions of dollars to foreign investors when states violate the international law commitments made in the treaties. Meanwhile, the cost to access and defend the arbitration can also climb to millions of dollars.

This book uses insights drawn from cognitive psychology and hard data to explore the reality of investment treaty arbitration, identify core demographics and basic information on outcomes, and drill down on the costs of parties' counsel and arbitral tribunals.

It offers a nuanced analysis of how and when cost-shifting occurs, parses tribunals' rationalization (or lack thereof) of cost assessments, and models the variables most likely to predict costs, using data to point the way towards evidence-based normative reform. With an intelligent interdisciplinary approach that speaks to ongoing reform at entities like the World Bank's ICSID and UNCITRAL, this book provides the most up-to-date study of investment treaty dispute settlement, offering new insights that will shape the direction of investment treaty and arbitration reform more broadly.