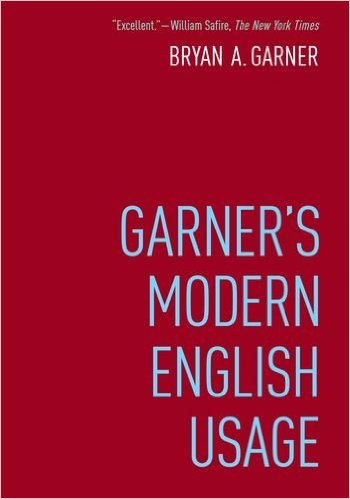 Bryan Garner is the most trusted living usage expert of our day, and Garner's Modern English Usage, previously known as Modern American Usage, is the preeminent guide to the effective use of the English language. With well over 6,000 entries on English grammar, syntax, word choice, punctuation, capitalization, spelling, and style, this book is adored by professional writers and general readers alike.

In this major update to a timeless classic, Bryan Garner has dramatically expanded coverage of international English usage, making the volume for the first time a guide not only to American English usage, but to English usage around the globe.

Interest in the English language is greater than ever; English is the lingua franca not only of higher education and academia, but of science, business, computing, aviation, and even - arguably - entertainment. An awareness of global English matters today as never before.

To ensure that Bryan Garner's clear, unambiguous advice resonates with English-speakers worldwide, more than 2,000 entries have been revised to account for the nuances of English not only in the United States, but in Australia and New Zealand, the United Kingdom, Canada, and South Africa.

Not everything has changed: readers will still find the popular "Garner's Language-Change Index" which registers where each disputed usage in modern English falls on a five-stage continuum from non-acceptability (to the language community as a whole) to acceptability, giving the book a consistent standard throughout. Bryan Garner's tools for scientific accuracy are, however, fully updated: this fourth edition benefits from usage data generated by Google Ngrams, which charts frequencies of any word or short sentence in sources printed after 1800.

With thousands of concise entries, longer essays on problematic areas such as subject-verb agreement and danglers, and meticulous citations of the New York Times, Newsweek, and other leading journalistic sources, this fourth edition of Garner's Modern English Usage provides priceless reference information to anyone hoping to improve as a writer - worldwide.