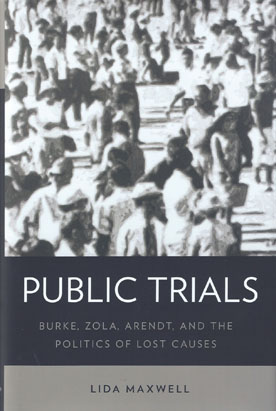 All three claimed that law and legal officials failed to do full justice to the new crimes they confronted - Hastings's imperial oppression of Indians, the French government's "crime against society," and Eichmann's "crimes against humanity." They also argued that this legal failure was enabled and supported by broad public complicity in the national myths that made injustice (or incomplete justice) appear as justice.

Maxwell looks at these three instances in order to challenge two dominant understandings of popular and legal failure in democratic theory that obscure how unsuccessful judgments can be productive. The first is that popular failure of a judgment indicates an irrational public (as legal checks and/or procedures for deliberation ensure justice); the second is that legal failure occurs when a judgment does not meet with the popular, national will.

By contrast, Maxwell sees these instances as an opportunity to question dominant norms of democratic thought. She argues that these narratives of democratic failure reveal problems with the idea that law can save the people from its failures. Burke, Zola, and Arendt recast instances of democratic failure in such a way that they become instructive in cultivating public responsiveness to such failures in the future. As Public Trials shows, such "lost cause narratives" foreground the importance of democratic action by telling stories about how the people could have pursued justice even in moments when the cause seemed foregone.

Contents:
Acknowledgments
Chapter 1: Public Trials and Lost Causes: The Politics of Democratic Failure
Chapter 2: Justice, Sympathy, and Mourning in Burke's Impeachment of Warren Hastings
Chapter 3: A Public with a Taste for Truth: Zola's Literary Appeals to the People during the Dreyfus Affair
Chapter 4: Comedy and/of Justice?: Law, Politics, and Public Opinion in Arendt's Writings on the Eichmann Trial
Chapter 5: Toward a Democratic Conception of Justice
Notes
Index