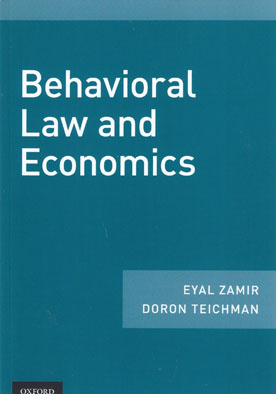 In the past few decades, economic analysis of law has been challenged by a growing body of experimental and empirical studies that attest to prevalent and systematic deviations from the assumptions of economic rationality.

Moreover, the impact of behavioral insights has long since transcended purely economic analysis of law: in recent years, the behavioral movement has become one of the most influential developments in legal scholarship in general.

Behavioral Law and Economics offers a state-of-the-art overview of the field. Eyal Zamir and Doron Teichman survey the entire body of psychological research that lies at the basis of behavioral analysis of law, and critically evaluate the core methodological questions of this area of research.

Following this, the book discusses the fundamental normative questions stemming from the psychological findings on bounded rationality, and explores their implications for setting the law's goals and designing the means to attain them.

The book then provides a systematic and critical examination of the contributions of behavioral studies to all major fields of law including: property, contracts, consumer protection, torts, corporate, securities regulation, antitrust, administrative, constitutional, international, criminal, and evidence law, as well as to the behavior of key players in the legal arena: litigants and judicial decision-makers.