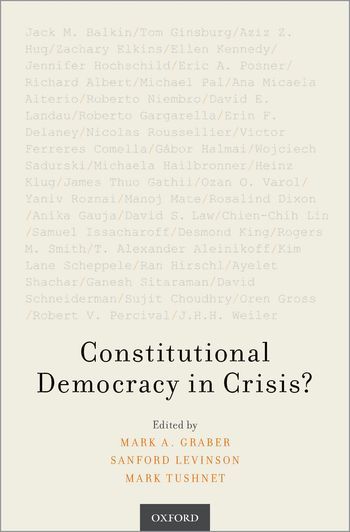 Is the world facing a serious threat to the protection of constitutional democracy?

There is a genuine debate about the meaning of the various political events that have, for many scholars and observers, generated a feeling of deep foreboding about our collective futures all over the world. Do these events represent simply the normal ebb and flow of political possibilities, or do they instead portend a more permanent move away from constitutional democracy that had been thought triumphant after the demise of the Soviet Union in 1989?

Constitutional Democracy in Crisis? addresses these questions head-on: Are the forces weakening constitutional democracy around the world general or nation-specific? Why have some major democracies seemingly not experienced these problems? How can we as scholars and citizens think clearly about the ideas of "constitutional crisis" or "constitutional degeneration"? What are the impacts of forces such as globalization, immigration, income inequality, populism, nationalism, religious sectarianism?

Bringing together leading scholars to engage critically with the crises facing constitutional democracies in the 21st century, these essays diagnose the causes of the present afflictions in regimes, regions, and across the globe, believing at this stage that diagnosis is of central importance - as Abraham Lincoln said in his "House Divided" speech, "If we could first know where we are, and whither we are tending, we could then better judge what to do, and how to do it."