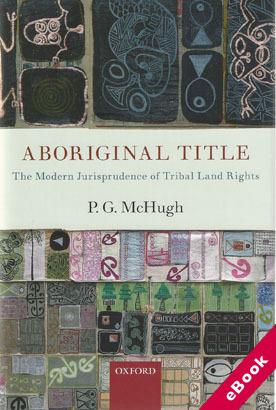 
ISBN13: 9780191018541
Published: August 2011
Publisher: Oxford University Press
Country of Publication: UK
Format: eBook (ePub)
Price: £110.00
The amount of VAT charged may change depending on your location of use.
Convert Currency

Aboriginal title represents one of the most remarkable and controversial legal developments in the common law world of the late-twentieth century.

Overnight it changed the legal position of indigenous peoples. The common law doctrine gave sudden substance to the tribes' claims to justiciable property rights over their traditional lands, catapulting these up the national agenda and jolting them out of a previous culture of governmental inattention.

In a series of breakthrough cases national courts adopted the argument developed first in western Canada, and then New Zealand and Australia by a handful of influential scholars. By the beginning of the millennium the doctrine had spread to Malaysia, Belize, Southern Africa and had a profound impact upon the rapid development of international law of indigenous peoples' rights.

This book is a history of this doctrine and the explosion of intellectual activity arising from this inrush of legalism into the tribes' relations with the Anglo settler state. The author is one of the key scholars involved from the doctrine's appearance in the early 1980s as an exhortation to the courts, and a figure who has both witnessed and contributed to its acceptance and subsequent pattern of development.

He looks critically at the early conceptualisation of the doctrine, its doctrinal elaboration in Canada and Australia - the busiest jurisdictions - through a proprietary paradigm located primarily (and constrictively) inside adjudicative processes. He also considers the issues of inter-disciplinary thought and practice arising from national legal systems' recognition of aboriginal land rights, including the emergent and associated themes of self-determination that surfaced more overtly during the 1990s and after. The doctrine made modern legal history, and it is still making it.

Contents:
1: Profile of a modern jurisprudence: an idea whose time had come
2: Common Law Aboriginal Title and its pipers at the gate of dawn - gestation (1970s) and breakthrough (1980s)
3: Doctrinal pathways in Canada and Australia - the devil in the detail of a maturing jurisprudence
4: Aboriginal title in the new century and new contexts: fraternal impact, international influence
5: Aboriginal title within and across disciplinary boundaries - anthropologists, historians and political philosophers
6: Aboriginal title - diagnosis and prognosis.