Constitutions and the Classics: Patterns of Constitutional Thought from Fortescue to Bentham (eBook) 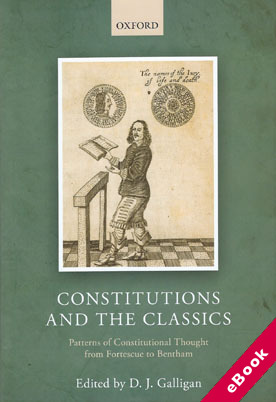 
ISBN13: 9780191025501
Published: December 2014
Publisher: Oxford University Press
Country of Publication: UK
Format: eBook (ePub)
Price: £76.00
The amount of VAT charged may change depending on your location of use.
Convert Currency

The period from the fifteenth century to the late eighteenth century was one of critical importance to British constitutionalism. Although the seeds were sown in earlier eras, it was at this point that the constitution was transformed to a system of representative parliamentary government.

Changes at the practical level of the constitution were accompanied by a wealth of ideas on constitutions written from different - and often competing - perspectives. Hobbes and Locke, Harrington, Hume, and Bentham, Coke, the Levellers, and Blackstone were all engaged in the constitutional affairs of the day, and their writings influenced the direction and outcome of constitutional thought and development.

They treated themes of a universal and timeless character and as such have established themselves of lasting interest and importance in the history of constitutional thought. Examining their works we can follow the shaping of contemporary ideas of constitutions, and the design of constitutional texts. At the same time major constitutional change and upheaval were taking place in America and France. This was an era of intense discussion, examination, and constitution-making.

The new nation of the United States looked to authors such as Locke, Hume, Harrington, and Sydney for guidance in their search for a new republicanism, adding to the development of constitutional thought and practice. This collection includes chapters examining the influences of Madison, Hamilton, Jefferson, and Adams. In France the influence of Rousseau was apparent in the revolutionary constitution, and Sieyes was an active participant in its discussion and design.

Montesquieu and de Maistre reflected on the nature of constitutions and constitutional government, and these French writers drew on, engaged with, and challenged the British and American writers. The essays in this volume reveal a previously unexplored dynamic relationship between the authors of the three nations, explaining the intimate connection between ruler and ruled.