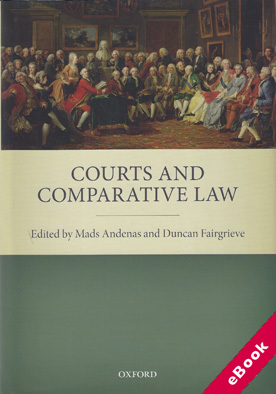 
ISBN13: 9780191059049
Published: July 2015
Publisher: Oxford University Press
Country of Publication: UK
Format: eBook (ePub)
Price: £160.00
The amount of VAT charged may change depending on your location of use.
Convert Currency

While the role of comparative law in the courts was previously only an exception, foreign sources are now increasingly becoming a source of law in regular use in supreme and constitutional courts.

There is considerable variation between the practices of courts and the role of comparative law, and methods remain controversial. In the US, the issue has been one of intense public debate and it is still one of the major dividing issues in the discussion about the role of the courts.

Contributing to the existing discussion of the use of comparative law in the courts, this book provides an inclusive, coherent, and practical analysis of the relevant law and jurisprudence in comparative law in the courts. It examines the consequences for court procedures and the form of judgments, as well as how foreign sources are drawn upon in private international law, European law, administrative law, and constitutional law as well as before general courts.

The book also includes case studies of comparative law used in particular spheres of the law, such as tort law and consumer law. Written by practising judges and lawyers as well as leading academics, this book serves as a central reference point concerning the role of comparative law before the courts.