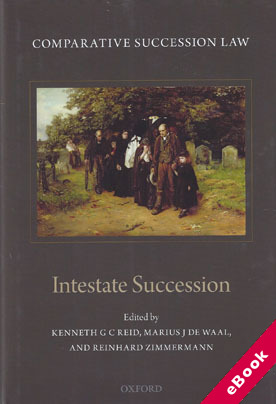 
ISBN13: 9780191064227
Published: August 2015
Publisher: Oxford University Press
Country of Publication: UK
Format: eBook (ePub)
Price: £154.17
The amount of VAT charged may change depending on your location of use.
Convert Currency

This eBook is available in the following formats: .

Intestate Succession is the second volume in the Comparative Succession Law series which examines the principles of succession law from a comparative and historical perspective. This volume discusses the rules which apply where a person dies either without leaving a valid will, or leaving a will which fails to dispose of all of the person's assets.

Among the questions considered are the following: What is the nature of the rules for the disposal of the deceased's assets? Are they mechanical or is there an element of discretion? Are particular types of property dealt with in particular ways? Is there entitlement to individual assets (as opposed to money)? Do the rules operate in a parentelic system or a system of some other kind? Are spouses treated more favourably than children? What provision is made for extra-marital children, for adopted children, for step-children? Does cohabitation give rise to entitlement? How are same-sex couples treated?

Broader questions also arise of a historical and comparative nature. Where, for example, do the rules in intestate succession come from in particular legal systems? Have they been influenced by the rules in other countries? How are the rules explained and how are they justified? To what extent have they changed over time? What are the long-term trends? And finally, are the rules satisfactory, and is there pressure for their reform?

As in the first volume, this book will focus on Europe and on countries which have been influenced by the European experience such as Australia, New Zealand, South Africa, the United States of America, Quebec, and the countries of Latin America. Further chapters are devoted to Islamic Law and Nordic law. Opening with a discussion on Roman law and concluding with an assessment of the overall development of the law in the countries surveyed, this book will provide a wider reflection on the nature and purpose of the law of intestate succession.