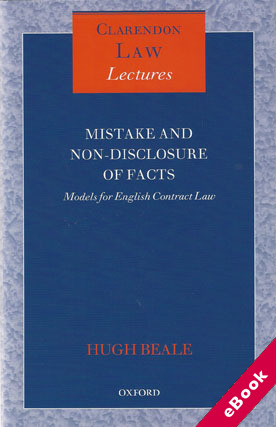 
ISBN13: 9780191641916
Published: August 2012
Publisher: Oxford University Press
Country of Publication: UK
Format: eBook (ePub)
Price: £49.49
The amount of VAT charged may change depending on your location of use.
Convert Currency

In this book Hugh Beale examines the case for reforming the law on mistake and non-disclosure of fact to bring English law closer to the law in much of continental Europe.

There, and in common law countries like the US, a party may avoid a contract for mistake of fact on a more liberal basis, and a party who deliberately keeps silent knowing that the other party is making a mistake may be guilty of fraud. This is not necessarily the case in England and Wales.

Developing a proposal for law reform, the author concedes that the English courts require a law that puts great emphasis on certainty and expects parties to look out for their own interests; but posits that this individualistic approach is not suitable for smaller businesses which are less sophisticated and which are likely to be making low value contracts, so that relative cost of taking advice will be high.

He argues that the solution may not be to reform English contract law generally, but to support the development of an optional instrument on contract law, along the lines of the Common European Sales Law recently proposed by the European Commission. This measure is aimed specifically at the needs of small and medium enterprises, and contains the protective rules found in the other jurisdictions.

It is aimed primarily at cross-border sales, but Member States would be given the option of adopting it for domestic transactions too. This would give small businesses the choice of using the current "hard-nosed" law or adopting the more protective optional instrument, recognizing that different parties require different things from the law governing their contract.

Contents:
I: DEFINING THE ISSUES
Background: 'European' Principles of Contract Law
Defining the Issue
Real Differences between English and the 'European' Laws
Conclusions
II: MISTAKE AND NON-DISCLOSURE IN OTHER SYSTEMS
Commonwealth Laws
European Models
United States
What to Make of the Survey?
III: POSSIBLE MODELS FOR ENGLISH LAW
Models Not to Follow
The Underlying Aim: Protection of Autonomy or Fairness in Exchange?
A Plausible 'Informed Consent' Model
Remedies
A Provisional Proposal