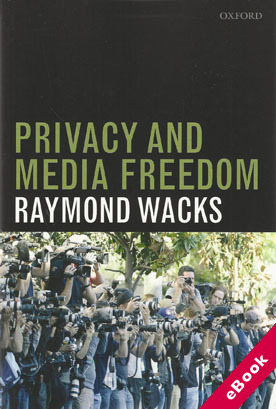 
ISBN13: 9780191645907
Published: June 2013
Publisher: Oxford University Press
Country of Publication: UK
Format: eBook (ePub)
Price: £41.48
The amount of VAT charged may change depending on your location of use.
Convert Currency

Freedom of expression is a fundamental right at the heart of any democratic society. It is, however, inevitably restricted by other important values, including the right to privacy: the control individuals exercise over their sensitive personal information.

The English law, since the enactment of the Human Rights Act 1998, has undergone a tectonic shift in its recognition of this right protected by Article 8 of the European Convention on Human Rights (ECHR) which the Act assimilated into domestic law. The new civil wrong, 'misuse of private information,' now affords greater protection to an individual's 'private and family life, home and correspondence.' The press is, of course, no longer the principal purveyor of news and information.

The Internet offers abundant opportunities for the dissemination of news and opinions, including the publication of intimate, private facts. Social media, blogs, and other online sites are accessible to all. Indeed, the fragility of privacy online has led some to conclude that it is no longer capable of legal protection.

This book examines the right of privacy from a legal, philosophical, and social perspective, tracing its genesis in the United States, through the development of the law of confidence, and its recent recognition by the Human Rights Act.

The English courts have boldly sought to offer refuge from an increasingly intrusive media. Recent years have witnessed a deluge of civil suits by celebrities seeking to salvage what remains of their privacy. An extensive body of case law has appeared in many common law jurisdictions over the last decade, which shows no sign of abating.

The Leveson Inquiry into the culture, practices, and ethics of the press, sparked by the hacking of telephones by newspapers, revealed a greater degree of media intrusion than was previously evident. Its conclusions and recommendations, particularly regarding the regulation of the media, are examined, as well as the various remedies available to victims of intrusion and unsolicited publicity.

The law is locked in a struggle to reconcile privacy and free speech, in the face of relentless advances in technology. The manner in which courts in various jurisdictions have attempted to resolve this conflict is critically investigated, and the prospects for the protection of privacy are considered.

Contents:
1. The Pursuit of Privacy
2. Freedom to Express What?
3. The Genesis
4. The New Order
5. Striking a Balance
6. Media Misconduct
7. Remedies
8. Problems and Prospects