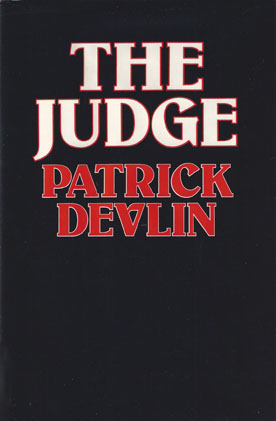 Lord Devlin, a Lord of Appeal though no longer in Ordinary, has continued to keep an eye on the law and the administration of justice in England, and himself in the public eye.

Indeed his detachment has enabled him to survey critically, while still at the height of his judicious powers, the whole operation of the legal system in which the English judges are continually conspicuous, and his observations on certain changes and movements in the law have occasioned public report and discussion; notably his Chorley Lecture at L. S. E. in 1975, the lecture he gave at All Souls College, Oxford, in May 1978, in which he criticized the Appeal Court's handling of the Cooper and McMahon case, and his Blackstone Lecture at Pembroke College, Oxford, of November 1978.

The thoughts that stimulated such lectures have been developed by the author to form this book on the place of the judge in the government (in the broadest sense) of the country and the service he gives to the community. Distilling nearly fifty years' legal experience, but here eschewing legal technicalities, Lord Devlin discusses many questions of interest to all citizens:-

To some of these questions Lord Devlin firmly answers No, but on all of them and many others he deploys his constructive imagination, intelligence, and knowledge, with many historical illustrations and always in luminous and pungent prose.