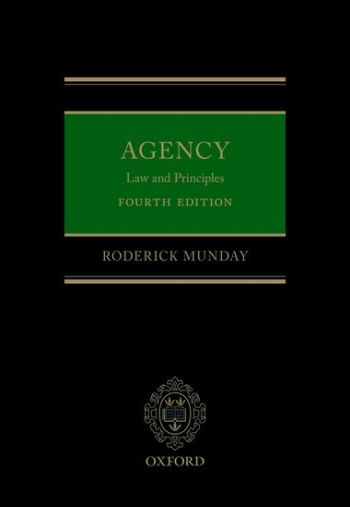 Questions of agency regularly arise in the work of commercial practitioners. Agency: Law and Principles addresses these questions by offering clear and accessible analysis of the principles of agency law, as well as detailed explanation of the Commercial Agents (Council Directive) Regulations of 1993.

Forensic analysis of case law is combined with a practical approach to the law which accurately reflects modern commercial realities, considering the application of agency principles according to particular classes of agents operating in the major commercial sectors. Areas discussed include actual and apparent authority of an agent, agency of necessity, want of authority and ratification looking at the legal relations between principal and agent, and between third party as well as the relations between agent and third party, sub-agency and termination of agency.

This fourth edition has been updated to include all significant new case law and legislation, while also considering the impact on the principles of agency law. The implications of the European Withdrawal Act (2018) regarding English Couts' interpretation of the Commercial Agents (Council Directive) Regulations 1993 are considered. Case law on the Regulations is covered as part of this analysis including Green Deal Marketing Southern Ltd v Economy Energy Trading Ltd (2019). The disputed decision in East Asia Company Ltd V PT Satria Tirtatama Energinde (2019) is analysed in the coverage of agents' apparent authority. The distinction between agents, employees and independent contractors with regards to vicarious liability, as exemplified in three Supreme Court decisions, Various Claimants v Catholic Child Welfare Society (2012), WM Morrison Supermarkets Plc v Various Claimants (2020) and Barclays Bank v Various Claimants (2020), is fully explained.