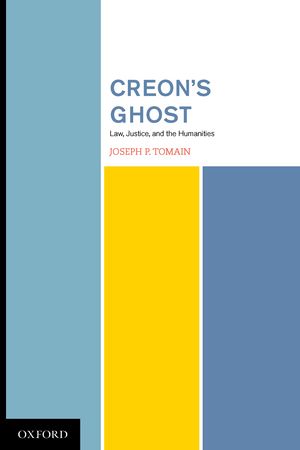 Debate about the separation of law and morality has ancient roots and is still vigorously discussed today. Mostly, the debate has been conducted as a technical problem in jurisprudence or legal philosophy. As a technical, philosophical problem, the arguments are rigorous and tend to be narrow.

Creon's Ghost enters the debate from a different angle by discussing the general responses to the problem by pairing stories from the humanities with various contemporary jurisprudential accounts. For example, Chapter 1 pairs Antigone with H. L. A. Hart to illuminate the legal positivist position on how law should be considered separate and apart from morality. Antigone, from which play is taken the text's principal interlocutor-Creon-Tomain develops his themes through the history of the humanities, all the while offering significant connections within the realm of legal scholarship.

The major 'schools'; of jurisprudence are treated at some length-legal positivism, natural law theory, legal realism, legal pragmatism, critical legal studies, et al. The author also presents arguments on why and how law is and should be connected with morality, presenting concepts from Plato's Republic together with Ronald Dworkin to illustrate the claim that law has and should have a moral unity.