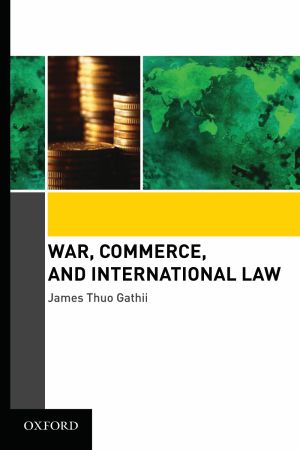 Recent wars and conflicts, the 'blood diamond' wars in the Democratic Republic of the Congo, and the wars in Iraq and Afghanistan, as well as asset freezing and blocking in The War Against Terrorism have more than ever before raised questions about the status of private property and contract rights after the outbreak of war. Do invading and occupying powers have the right to destroy and confiscate private property and ignore contract rights? Are residents of a war-torn countries and foreign investors alike protected by international laws that uphold commercial freedom? Who, and on what legal authority, decides cases over contested resources during or after war? As globalization and armed conflicts continue to grow and co-exist, these questions are increasingly in the international spotlight.

War, Commerce, and International Law authoritatively explores these questions in the context of the relationship between war and commerce, on one hand, and international law, on the other. This book also places these questions in a historical context. Professor Gathii argues that there are continuities and discontinuities in the ways in which these rules were applied in colonial acquisitions of territory and in the protection of the rights of bond holders in the period before the twentieth century, and the manner in which private property and contract rights are being treated under occupation and during wartime in the contemporary period.

This book also offers an original and authoritative framework for appreciating relations between powerful and less powerful States and entities and between public and private power, as well as between peoples from vastly different cultural and racial backgrounds, in the context of war and commerce. It presents authoritative comparisons and contrasts between the protection of rights of foreign and domestic investors under international law in the context of war. In so doing, it debunks the story that commerce has prevailed over wartime deprivations and destructions of private property and contract rights. It shows how wartime effects on private property are a constitutive component of war rather than an aberration of it. Professor Gathii demonstrates that while international legal prohibitions against destruction and confiscation of private property during wartime are important, they have often been disregarded or sacrificed at the alter of claims of liberty and freedom historically as well as in the contemporary period.

Most importantly, War, Commerce, and International Law shows that although the doctrines and rules of international law relating to war and commerce guarantee fairness between all states, their application, interpretation, and adjudication in a variety of contexts nevertheless simultaneously carry forward within them the legacy of imperialism and colonial conquest. However, while international law carries within it this legacy, its guarantees of the equality of all states and of the human rights of all individuals, continue to offer hope for poor and weak states and individuals everywhere.