Retrospectivity and the Rule of Law 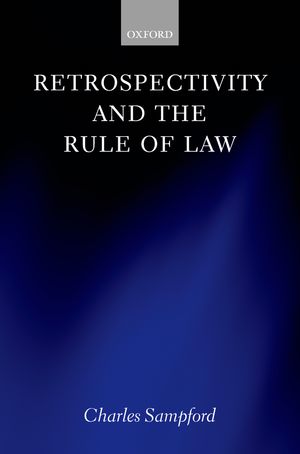 Retrospective rule-making has few supporters and many opponents. Defenders of retrospective laws generally do so on the basis that they are a necessary evil in specific or limited circumstances, for example to close tax loopholes, to deal with terrorists or to prosecute fallen tyrants. Yet the reality of retrospective rule making is far more widespread than this, and ranges from 'corrective' legislation to 'interpretive regulations' to judicial decision making.

The search for a rational justification for retrospective rule-making necessitates a reconsideration of the very nature of the rule of law and the kind of law that can rule, and will provide new insights into the nature of law and the parameters of societal order.

This book examines the various ways in which laws may be seen as retrospective and analyses the problems in defining retrospectivity. In his analysis Dr Charles Sampford asserts that the definitive argument against retrospective rule-making is the expectation of individuals that, if their actions today are considered by a future court, the applicable law was discoverable at the time the action was performed.

The book goes on to suggest that although the strength of this 'rule of law' argument should prevail in general, exceptions are sometimes necessary, and that there may even be occasions when analysis of the rule of law may provide the foundation for the application of retrospective laws.