Essays on the Law of Restitution 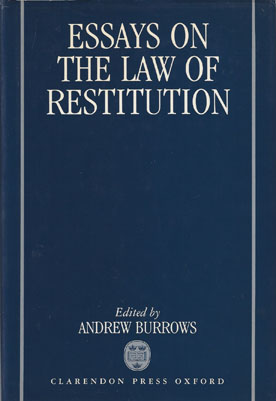 When Goff and Jones published The Law of Restitution in 1966 they can justifiably be said to have 'created' a new legal subject, for they convincingly showed that a mass of cases drawn from apparently disparate areas were best understood and explained as applications of an underlying and unifying principle of reversing unjust enrichment. Goff and Jones therefore put restitution on the English legal map as a subject as important and central as contract or tort.

While some lawyers would still dispute Goff and Jones' thesis, there has been increasing recognition in recent years, both in the law courts and in academia, of the English law of restitution. Several universities now run courses on restitution, and it also forms an integral part of numerous remedies, common law, and obligations courses. Articles.on restitution have recently become commonplace in legal journals and references to restitution and unjust enrichment are increasingly found in legal judgments.

In 1991 it will be twenty-five years since the publication of Goff and Jones' pioneering work, and it therefore seems an appropriate time for the appearance of a new contribution to the ongoing fight for the recognition, development, and correct application of the law of restitution.