This book is now Out of Print.
A new edition has been published, the details can be seen here:
Competition in Energy Markets: Law and Regulation in the European Union 2nd ed isbn 9780199282975 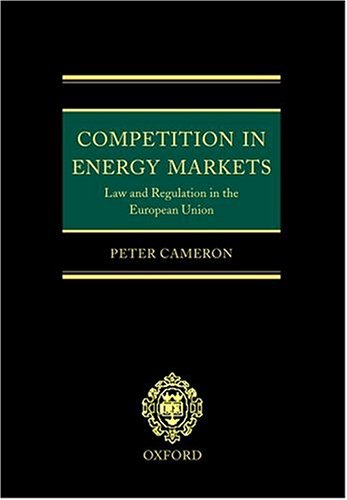 Recent years have seen a major growth in the European law concerning the operation of the energy industry, especially with respect to electricity and gas. Several directives have been adopted that are aimed at the promotion of competition in this key sector of the European economy. At the same time, the jurisprudence of the European Court had developed further on matters such as access to networks, import and export monopolies and security of supply.

In this book the authors examine the principal legislation, Treaty provisions and decisions of the Court of Justice and Court of First Instance of the EU as they related to the promotion of competition in European energy markets. In particular, two chapters are devoted to a detailed analysis of the provisions of the two directives that set out common rules for the creation of an internal market in the electricity and gas sectors. In each case, the analysis is set in the context of the various programmes of energy market liberalization and privatization in the Member States, which are summarized in this book. However, the authors also take the wider pan-European context into account, explaining the requirements and the implications of the European Economic Area Agreement, the Energy Charter Treaty and the Europe Agreements with countries of Central and Eastern Europe.

The approach adopted by the authors is both analytical and historical. They locate the legislation in the context of the EU Internal Market programme that began in the late 1980s and explain the roles played by the various parties (energy industries, consumers and EU institutions) in shaping the final legislation. Importantly, they explain how the framework character of the energy directives has led to further important rule-making in the implementation of the directives across the EU. They conclude that a co-ordinated response between the European Commission and the national regulators will be essential to resolve problems arising in the transition to a competitive energy market in the EU.