The Golden Metwand and the Crooked Cord: Essays in Honour of Sir William Wade 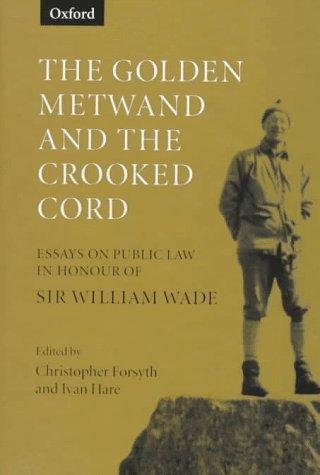 This is a lively collection of essays by an internationally distinguished group of the world's most respected administrative lawyers. It is a timely work as public law in the United Kingdom is at an extremely interesting stage in its long development. A period of unprecedented expansion in the judicial review jurisdiction and the growing legal impact of membership of the European Community provide an incentive to reflect upon and consolidate existing learning, and assess how public law doctrine and scholarship will progress into the new millenium.

There has also been a recent burgeoning of theoretical public law scholarship and the development of more critical and socio-legal approaches to the subject of law and administration. This book takes account of all these factors, and also reflects the international dimension of administrative law issues.

The essays are written in honour of Sir Wlliam Wade, who was Professor of English at St John's College Oxford, Rouse Ball Professor of English Law at the University of Cambridge and Master of Gonville and Caius College Cambridge. He is one of the leading scholars of his generation and is justly credited for having contributed hugely to the development of administrative law in Britain through his text Administrative Law (OUP) but also through the Hamlyn lectures and through his work as a member of the English bar, his lectures throughout the world and numerous articles, notes and essays.

Contents:
Print On Demand Edition;
1. Sir William Wade
2. Fairness, Equality, Rationality: Constitutional Theory and Judicial Review
3. The Constitutional and Legal Framework of Policy-Making
4. Prerogative, Precedent and Power
5. Expropriation, Public Purpose and the Constitution
6. The Separation of Powers and Judicial Review for Error of Law
7. "The Metaphysic of Nullity" Invalidity, Conceptual Reasoning and the Rule of Law
8. Wednesbury
9. Prematurity and Ripeness for Review
10. The Crown in its own Courts
11. "Time, Time, Time It's, on my Side, Yes it is"
12. The Consequences of Disclosure in the Public Interest
13. Damages and the Right to an Effective Remedy for Breach of European Community Law
14. The Discretionary Heart of Administrative Law