The Reality of International Law: Essays in Hounour of Ian Brownlie 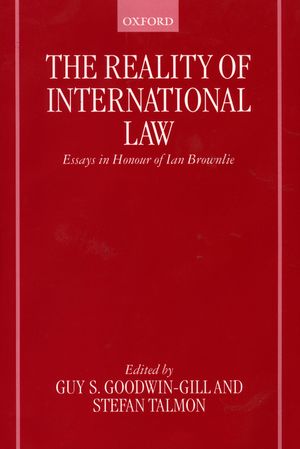 Professor Ian Brownlie, CBE, OC, FBA, DCL retired from the Chichele Chair of Public International Law at the University of Oxford, a post that he has held since 1980. Before that he taught at Oxford, Nottingham, and the London School of Economics. He is widely recognized as one of the leading international lawyers of our time, and as well known and appreciated as much for his seminal publications and teaching over the years, as for his work as a practitioner.;To express their gratitude for his supervision and support, a number of his present and former students from Oxford and London (many now prominent in academic life, foreign affairs, and practice), have written this collection of essays in honour of their former teacher. The collection is a very personal one reflecting the close and warm relationship between teacher and students and results in a wide-ranging overview of the subjects supervised by Professor Brownlie during more than forty years as an academic teacher.;The collection takes its title, The Reality of International Law, from an appreciation of Professor Brownlie's personal contribution to the development of the subject. His commitment to international law as a system for the regulation of affairs between states has long been characterized by a strong sense of ideals, political and human, but also by an awareness, duly transmitted to his students, and of what law is in practice, of what is achievable, and of what remains to be done.

Contents:
1. The Effective Enforcement of High Sea Fishing: The Case of the 'Convention for the Regulation of the Police of the North Sea Fisheries of 6 May 1882'; 2. The Legality of Restrictions on Freedom of Movements within States; 3. A Taste of Armageddon: The Law of Armed Conflict as Applied to Cyberwar; 4. Rethinking Panama: International Law and the US Invasion of Panama, 1989; 5. Israel (1948-9) and Palestine (1998-9): Two Studies in the Creation of States; 6. International Law; 7. Maritime Delimitation After Denmark v, Norway: Back to the Future; 8. The Utilization of International Groundwater in General International Law; 9. Expulsion, Removal, and the Non-Derogable Obligation; 10. Adjudicatory Jurisdiction Over Multilateral Enterprises: 'Lifting the Veil' in the EU and the USA; 11. The Differing Concepts of War Crimes and Crimes Against Humanity in International Criminal Law; 12. State Responsibility and the 1948 Genocide Convention; 13. The Quality of Justice: 'Exces de Pouvoir' in the Adjudication and Arbitration of Territorial and Boundary Disputes; 14. Operational Policies of International Relations as part of the Law-Making Process: The World Bank and Indigenous Peoples; 15. From Reform to Realism: The Council of Europe; 16. Governance and Coordination in Conflict and Post-Conflict Situations: Challenge or Maze?; 17. Legal Limits to the Powers of the United Nations Security Council; 18. Defences to Responsibility in the Jurisprudence of International Tribunals; 19. The Protection of Human Rights in Emergency Situations under Customary International Law; 20. International Criminal Environmental Law; 21. The Moral Foundation and Identification of International Obligations erga omnes: Two Japanese Contributions; 22. Habeas Corpus and the Canadian Charter of Rights and Freedoms; 23. Who is a Government in Exile?; 24. Resource Entitlement in the Law of the Sea: Some Areas of Continuity and Change; 25. Forum prorogatum and the Indication of Provisional Measures in the International Court of Justice; Index