Freedom of Expression and Freedom of Information: Essays in Honour of Sir David Williams 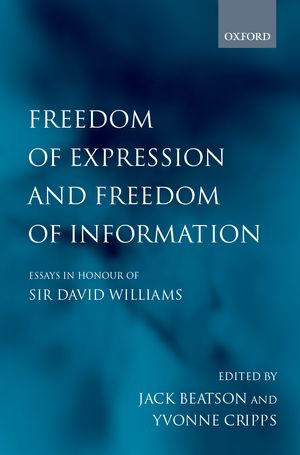 The volume deals with vital issues on freedom of expression and freedom of information and emphasizes the importance of the free exchange and dissemination of ideas and of open, and therefore more accountable, government. It notes the ways in which these freedoms have received recent legislative attention in the Human Rights Act 1998, the Public Interest Disclosure Act 1998 and the Freedom of Information Bill.;Articles on subjects such as freedom of speech, religion, and assembly; defamation of the state and of politicians; harassment, official secrecy, public interest disclosure, and the protection of privacy; focus on issues of political and legal importance to all who take an interest in how their country is governed.;These matters are addressed here by leading judges, practitioners, and scholars from the UK, the USA, Australia and New Zealand. They provide timely and authoritative analysis as well as comparisons between British protections of these freedoms and the safeguards offered by other Commonwealth states, the USA, the EU and under the European Convention on Human Rights.;This book will be of interest to academic and practising lawyers, government officials, and academics working in departments of politics and government.