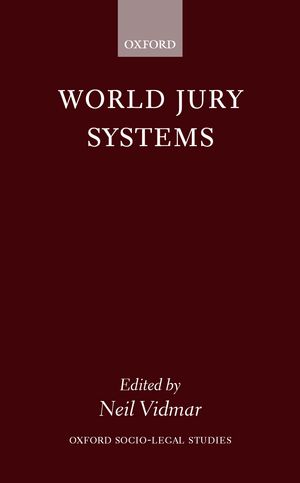 The jury system that evolved in England, and rightfully viewed as a milestone in the development of modern notions of procedural justice, was seen as a `right of Englishmen' and transported to its colonies around the world. Although use of the civil jury has diminished, at the beginning of the 21st century, the criminal jury continues to play an important role in the justice systems of more than 50 countries and territories around the world. This volume presents coverage of the jury systems of Australia, England, Canada, New Zealand, the Republic of Ireland and Northern Ireland, Scotland, and the United States. Coverage includes civil as well as criminal juries.;There is also a chapter on the criminal jury systems of Spain and Russia, and a chapter on potential revival of the jury system that once existed in Japan.

The Social World of an English Crown Court: Witnesses and Professionals in the Crown Court Centre at Wood Green
Paul RockProfessor of Sociology, London School of Economics
ISBN 9780198258438
Published May 1995
Oxford University Press
£63.00