A History of Private Law in Scotland: Volume 2. Obligations 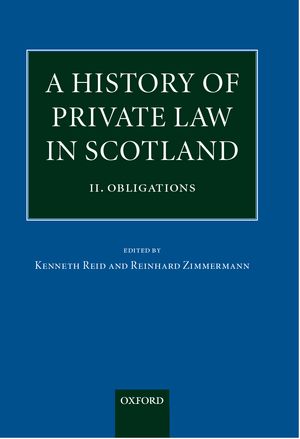 Scotland has a special claim for the attention of comparative lawyers, of legal historians, and of those who seek to identify a common core in European private law or to develop a new jus commune. For Scotland stands at the intersection of the two great traditions of European law--of the law of Rome, received and developed in Continental Europe, and of the law which originated in England but was exported throughout the British Empire. In Scotland, uniquely in Europe, there is to be found a fusion of the civil law and the common law. Law in Scotland has a long history, uninterrupted either by revolution or by codification. It is rich in source material, both printed and archival. Yet hitherto the history of legal doctrine has been relatively neglected. This work is the first detailed and systematic study in the field of private law. Its method is to take key topics from the law of obligations and the law of property and to trace their development from earliest times to the present day. A fascinating picture emerges. The reception of civil law was slow but profound, beginning in the medieval period and continuing until the eighteenth century. Canon law was also influential.;This was flanked by two receptions from England, of Anglo-Norman feudalism in the twelfth century and beyond, and, more enduringly, of aspects of English common law in the nineteenth and twentieth centuries. In addition there was much that was home-grown. Over time this disparate mixture was transformed by legal science into a coherent whole.