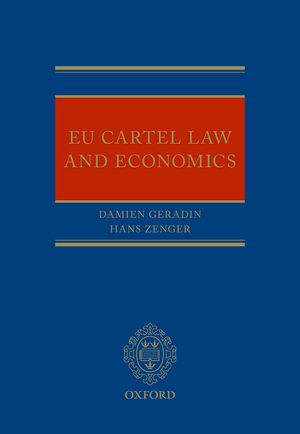 The significant evolution of EU competition law in the last 15 years has been fundamentally influenced by economic theory, and economic aspects of cartel prosecution are increasingly relevant in modern competition practice.

EU Cartel Law and Economics is the first book-length assessment of cartels from an integrated law and economics perspective. This perspective allows for a more insightful evaluation of the wide variety of practices at the intersection between collusive restrictions of competition and pro-competitive agreements between firms.

It sheds light on the underlying mechanics of cartels, including how to detect anti-competitive conspiracies in the absence of hard evidence. It also provides a more conceptual approach to cartel law, outlining ways in which the current legal structure can be applied more effectively to deter anti-competitive conduct without discouraging pro-competitive forms of cooperation between firms.

The book is divided into four parts: the first part provides a conceptual overview of the law and economics of cartels; the second part describes the central legal analysis in cartel cases; the third part summarises the regulatory process in cartel investigations; and the fourth part deals with civil damages.