The Structure of Tort Law 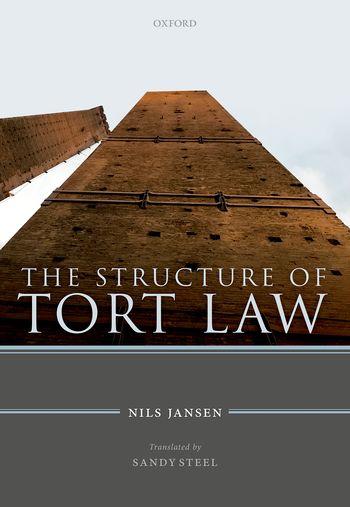 This English translation makes available to anglophone readers a modern classic of German tort theory. It argues that modern German tort law is faced with doctrinal tensions based on problematic theoretical assumptions which stem from historical conceptions of tortious liability, inappropriate to modern times.

From a theoretical perspective, it argues against the prevalent doctrinal view in Germany that conceives of tortious liability as split between two tracks - a fault-based track and a strict liability track - each with different normative foundations. Instead, Jansen asserts that there is no rigid distinction between the normative foundations of each form of liability. Rather, both fault liability and strict liability in German law, and indeed other European systems, are best considered as resting upon the unifying theoretical structure of outcome responsibility. The book thus places responsibility rather than wrongdoing at the centre of the normative foundations of tort law. Historically, the book traces in detail how conceptions of tort liability have changed from Roman law to contemporary legal doctrine. It shows how particular historical understandings of the normative basis of tort law have led to continuing normative tensions in contemporary doctrine. Finally, the book examines how a reconstruction of modern German - and, indeed, European - law as based upon outcome responsibility should affect its doctrinal structure.

This book makes contributions to the study of the theory, history, and doctrinal structure of tort law. While drawing on and explaining German tort law, its comparative, theoretical, and historical analysis will be of interest to scholars in all legal systems.

Contents:
Introduction - The Aim of the Inquiry
Part I: A Theoretical Framework
1.:Tort Law Norms
2.:The Structure of Normative Reasoning in Tort Law
3.:The Effect of Tort Liability upon Behaviour
Part II: A Step Back...
4.:Delictual Liability in Roman Law
5.:Sanction and Duty, Individual Rights, and Compensation: On the Rebirth of Roman Law of Delict in Natural Law Discussions
6.:Steps towards a Modern Tort Law
Part III: Doctrinal Foundations
7.:Injurious Conduct
8.:Violation of a Right, Economic Loss, and Compensation
9.:The Structure of Tort Law