Saving the Oceans Through Law: The International Legal Framework for the Protection of the Marine Environment 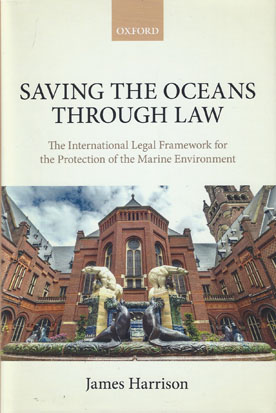 The oceans cover more than seventy per cent of the surface of the planet and they provide many vital ecosystem services.

However, the health of the world's oceans has been deteriorating over the past decades and the protection of the marine environment has emerged as one of the most pressing legal and political challenges for the international community. An effective solution depends upon the cooperation of all states towards achieving agreed objectives.

This book provides a critical assessment of the role that international law plays in this process, by explaining and evaluating the various legal instruments that have been negotiated in this area, as well as key trends in global ocean governance.

Starting with a detailed analysis of the United Nations Convention on the Law of the Sea, the book considers the main treaties and other legal texts that seeks to prevent, reduce, and control damage to the marine environment caused by navigation, seabed exploitation, fishing, dumping, and land-based activities, as well as emerging pressures such as ocean noise and climate change.

The book demonstrates how international institutions have expanded their mandates to address a broader range of marine environmental issues, beyond basic problems of pollution control to include the conservation of marine biological diversity and an ecosystems approach to regulation.

It also discusses the development of diverse regulatory tools to address anthropogenic impacts on the marine environment and the extent to which states have adopted a precautionary approach in different maritime sectors. Whilst many advances have been made in these matters, this book highlights the need for greater coordination between international institutions, as well as the desirability of developing stronger enforcement mechanisms for international environmental rules.

Contents:
1: Introduction
2: The United Nations Convention on the Law of the Sea and General Principles for the Protection and Preservation of the Marine Environment
3: Land-based Sources of Marine Pollution
4: Dumping of Waste at Sea
5: Marine Environmental Threats from Shipping
6: Fishing and the Conservation of Marine Biodiversity
7: Seabed Activities Within and Beyond National Jurisdiction
8: Addressing the Marine Environmental Impacts of Climate Change and Ocean Acidification
9: Towards Integrated Management of the Oceans at the International Level
10: The Role of International Law in Saving the Oceans and Future Challenges for the Legal Framework