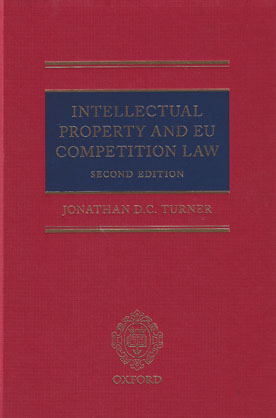 The interface between intellectual property rights and competition policy is one of the most important and difficult areas of EU commercial law and corresponding national laws.

The exploitation of exclusive rights can conflict with competition law, which aims to preserve competition as the driving force in efficient markets. These conflicts have to be resolved against the background of a complicated relationship between EU law, national laws, and international treaties relating to intellectual property.

This second edition of an extremely well-reviewed work covers numerous developments that have taken place since the first edition, including the revision of the Technology Transfer Block Exemption and Guidelines, the adoption of a new block exemption for Research and Development, revised Guidelines on horizontal co-operation, the implications of the UsedSoft judgment on exhaustion of rights, EU legislation regulating collecting societies, and cases concerning the abuse of dominant position by misuse of the patent system such AstraZeneca v Commission.

The book contains a detailed explanation of the application of EU competition law to all types of intellectual property and the resulting regulatory framework for the exploitation and licensing of intellectual property rights. It has practical analysis of such issues as technology transfer and pools, standards, research and development, collecting societies, franchising, and merchandising. The first edition was quoted with approval by the English Court of Appeal.