The Roman Law of Obligations 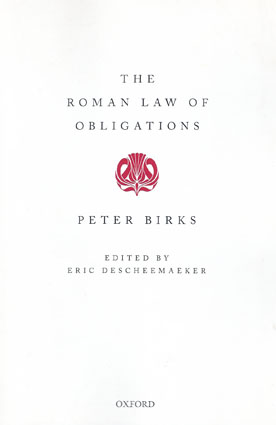 The Roman Law of Obligations presents a series of lectures delivered by the late Peter Birks as an introductory course in Roman law. Discovered in complete manuscript form following his death, the lectures are published here for the first time.

The lectures present a clear conceptual map of the Roman law of obligations, guiding readers through the institutional structure of contract, delict, quasi-contract, and quasi-delict. They introduce readers to the terminology needed to understand the foundations of Roman law, and the conceptual framework of the law of obligations that left an enduring legacy on European private law.

The lectures offer an invaluable introduction to Roman private law for those coming to the subject for the first time. They will also make stimulating reading for academics and lawyers interested in Roman law, European legal history, and the lasting influence of Roman law on modern private law.