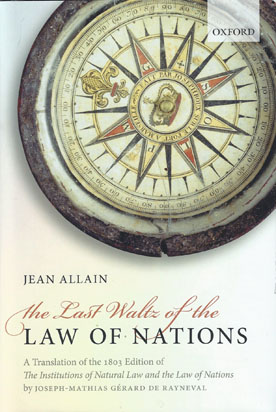 The 1803 edition of de Rayneval's The Institutions of Natural Law and the Law of Nations served as the leading French text on international law during the first half of the nineteenth century.

Written at a time when international law was wholly bilateral in nature, the book decisively sets out the Law of Nations as it stood at the time. Despite its influence on the development of international law in the nineteenth century, the work is now difficult to obtain, and has never before been translated into English.

Through his faithful translation and introductory essay, Jean Allain reintroduces this classic work to a new audience. Keeping in line with the fundamental approach and underpinning of de Rayneval's work, this new text considers issues of the Law of Nations, with Book I focusing on self-preservation of the individual turning to self-preservation of political grouping to the creation of the States as a means of ensuring its and its people's self-preservation.

In Book II - On State to State Relations - the emphasis shifts from natural law to the Law of Nations. Here consideration is given to States and issues of independence, of trade and alliances, of the acquisition of territory, of boundaries, of reprisals, and issues of foreigners, ambassadors and titles and rank.

Finally, Book III - On the State of War and Peace - takes readers through a more clearly developed part of the Law of Nations with regard to the origins, causes, effects, and conduct of war with further sections devoted maritime law and the law of treaties.

While Book II and III set out the law of the Law of Nations, the Appendix then considers the role of the Sovereign and his political agents in setting and carrying out a State's foreign policy.

Contents:
BOOK I: On the Origins of Political Societies and the Principles which are the basis of their Organisation
I: On the origins of societies and governments
II: On the formation of Governments
III: On Sovereignty
IV: On Liberty
V: On Equality
VI: On Hereditary States
VII: On Inviolability
VIII: On Slavery
IX: On Power
X: On Legislative Power
XI: On Executive Power
XII: On Judicial Power
XIII: On Law in General
XIV: On Public Laws
XV: On Private or Civil Laws
XVI: On Criminal Laws
XVII: On the Police
XVIII: On Armed Forces
XIX: On Population
XX: On Contributions or Taxes
XXI: On Virtue and Honour
XXII: On Education and Instruction
XXIII: On Mores and on Morale
XXIV: On Patriotism
XXVII: On Religion and on Cults
XXVIII: On Internal Disturbances
BOOK II: On State to State Relations
I: On the Independence of States
II: On Limits
III: On State to State Communications
IV: On Trade
V: On Alliances
VI: On Obligations Resulting from Alliances
VII: On the Methods of Acquisition between States
VIII: On Prescription
IX: On the Seas
X: On Fleuves, Rivers and Lakes
XI: On Guarantees
XII: On Retortion, Reprisals, Embargo, and Retaliation
XIII: On Foreigners
XIV: On Political Agents
XV: On Titles, Ranks, and Dignity of Sovereigns
BOOK III: On the State of War and of Peace
I: On the Origins of War
II: On the Causes of War
III: On Declarations of War
IV: On Legal or Defendable Actions According the Laws of War
V: On the Effects of War
VI: On Prisoners
VII: On Hostages
VIII: On the inhabitants of conquered lands
IX: On Sieges, on Blockades, on Capitulations
X: On Safe Conducts and Safeguards
XI: On Allies, on Associates, on Auxiliaries
XII: On Neutrals
XIII: On Maritime Warfare and Navigation
XIV: On Visitation
XV: On Letters of Marque
XVI: On Prizes
XVII: On Suspension (relâches)
XVIII: On Agreements between Enemies, notably Truces, Armistices, Suspension of Hostilities
XIX: On the Right of Postliminy
XX: On Peace Treaties
XXI: On Arbitrators
XXII: On Mediation
XXIII: On Execution of Treaties
XXIV: On Interpretation of Treaties
XXV: On Adherence to Treaties
XXVI: On Non-Execution of Peace Treaties
APPENDIX: Ideas on Policy
On Political Agents
Section I
Section II
Section III